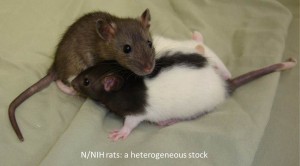 The N/NIH heterogeneous stock (HS) breeding core, under the direction of Dr. Leah Solberg Woods at Wake Forest University (WFU), will provide HS rats for Research Projects 1-3.  HS animals are outbred from eight inbred rat strains and maintained in a manner that minimizes inbreeding, enabling the fine-mapping of quantitative trait loci (QTL). Dr. Solberg Woods’ laboratory has maintained the HS rat colony for the past twelve years and hers is the only laboratory in North America to house this unique resource.
The two main goals of this core are to 1) maintain the HS rat colony in a way that minimizes inbreeding and 2) ship a genetically diverse set of HS rats to Research Projects 1-3.
To minimize inbreeding and control genetic drift, the HS rat colony consists of more than 64 breeder pairs and is maintained using a randomized breeding strategy, with each breeder pair contributing one male and one female to subsequent generations.  By providing a genetically diverse set of HS rats to Research Projects 1-3, this Core provides the backbone for the genetic studies performed in this Center.

Rats used in Year 1-5 come from a MCW colony (NMcwi:HS). Rats used in years 6-10 come from the Wake Forest colony (NMcwiWFsm:HS). In 2022 we established a colony in UCSD (“HS West”) to provide rats for the collaborators on the West coast.
Because most of the original founders are no longer available, recent phenotyping studies are conducted using similar founder sub-strains (see Solberg Woods et al. 2010; Solberg Woods et al. 2012; Richards et al. 2013). Because a high degree of genetic diversity was one of the initial goals of creating this colony, founder strains were chosen to encompass as much genetic diversity as possible. At the time, full genome sequences, or even high-density marker panels were not available. In the absence of this information, the investigators chose strains based on strain origin, choosing only three strains from the popular Wistar stock (MR/N, WN/N and WKY/N), with the other strains coming from varying origins (Hansen and Spuhler 1984). Since the time the colony was developed, it has been confirmed that these eight progenitors encompass a broad degree of genetic diversity (Saar et al. 2008). All original founders have recently been fully sequenced (Baud et al. 2014) and this sequence is publicly available on the Rat Genome Database (RGD). 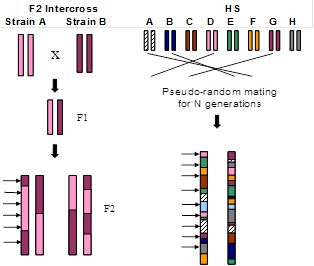 Figure 1: Comparison of F2 intercross strategy with HS strategy. Different colored bars represent the genetic background of the inbred strains. Arrows represent hypothetical genetic markers. The average distance between recombination in the F2 generations is approximately 30 centiMorgans (cM), whereas it is approx. 2 cM in the HS.

How to request HS Rats

As part of the HS Breeding Core, the HS rat colony is a national resource, with HS rats available to investigators within the Center as well as outside of the Center on a cost-recovery basis.
To request HS rats, please contact the Scientific coordinator. You may also contact Dr. Palmer or Dr. Solberg Woods to discuss the details of the project.

The Hybrid Rat Diversity Panel (HRDP) identified the best 8 modern rats strains as proxies for the 8 HS founders. The cost of each rat is $112.12. To order rats please write to Dr. Mindy Dwinell, HRDP@mcw.edu.