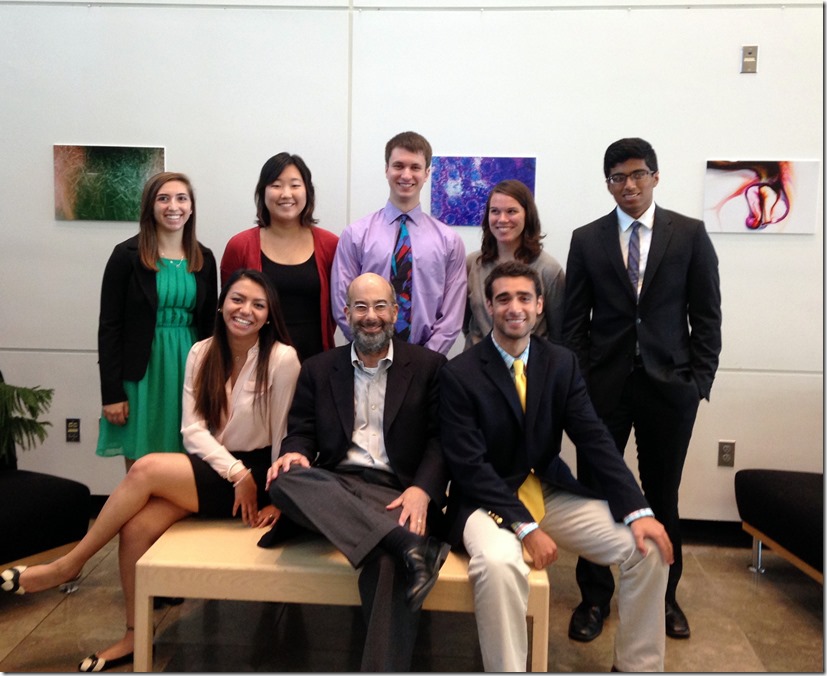 The Genes and Addiction Center’s Research Experiences for High School and Undergraduate Students (REHU) provided six participants an opportunity to conduct 10-week summer research projects with their mentors. REHU students attended a working lunch with their peers, a journal club to present results about a published neuroscience paper, and a symposium to give summary talks about their REHU projects.

REHU Symposium was held on August 13, 2015 in the Gordon Center for Integrative Science at the University of Chicago.

Abby Salinero, Undergraduate, University of Albany. ”Protocol Optimization for the Development of a Rat Model of Alcoholism” 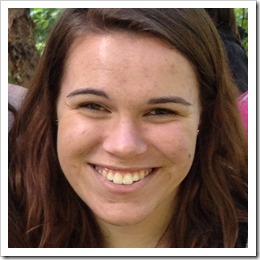 I have been soldering and assembling environmental sensors for Dr. Chen’s rat cages.   I’ve also learned how to run alcohol self-administration assays and behavior tests like the rotorod and tremor, and I’ve learned how to collect tissues from the rats. I am learning Python. I am primarily responsible for the alcohol self-administration project.  Specifically, we are developinga protocol that optimizes the acquisition of an addiction to ethanol in rats, which historically has not been seen too readily.  The project compares rats from different groups receiving either ethanol alone, ethanol plus WS23 (a appetitive, coolong agent), and WS23 alone. 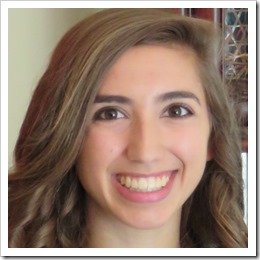 I am a biology major at the University of Chicago (Class of 2018) interested in pursuing computational neuroscience and/or artificial intelligence at the graduate level –  I have always been fascinated with how the brain can be integrated with technology. I am also a member of the Neuroscience Education, Undergraduate Research, and Outreach (NEURO) Club at the University of Chicago.

This summer, under the NIDA Center Rat GWAS (P50) project, I worked with Dr. Leah Solberg Woods at the Medical College of Wisconsin on a project concerning Heterogeneous Stock (HS) rats in the Forced Swim Test (FST). The FST has commonly been used to measure depressive behavior as well as the effectiveness of antidepressant compounds. After exposure to the FST, animals generally display an increase in immobility which is often interpreted as learned helplessness or behavioral despair, in essence a depressive behavior, and antidepressant treatment typically reverses this effect by increasing mobility.

With our findings, we were able to devise an improved FST protocol and also validate a computer scoring system in Matlab that quantifies motion in the FST to replace visual scoring. These adjustments reduce the time for both data collection and analysis of the FST. Therefore, in the future many animals of the HS colony can be efficiently run through the FST, after which their computer motion scores and genotypes will be compared for fine Quantitative Trait Loci (QTL) mapping of genes associated with depressive behavior. Furthermore, the FST can be used to test for the effects of antidepressant compounds in the animals of the HS colony. We predict that the genetically distinct HS rats will exhibit differences in response to certain antidepressant compounds.

With this information, identifying genes connected to depressive behavior as well as determining differences in response to antidepressant compounds, we aim to better understand and more effectively treat patients with clinical depression. 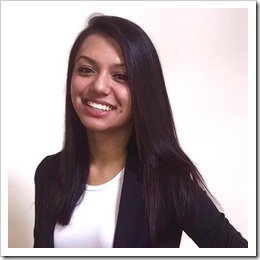 I have been working on a project which involves researching the effects of a novel GLO1 inhibitor by using a number of different behavioral models of neuropsychiatric disorders to examine whether the compound can attenuate the effects of anxiety/depression in mice. I am working with the Chronic Mild Stress model of depression using mice to explore the therapeutic effectiveness of Glo1 inhibitors in anti-anxiety medication/antidepressants. We are using behavioral indicators such as forced swim test (FST), sucrose preference, sucrose splash test, nest building, and coat state as measures of how stressed/depressed the mice are. My second project involves looking at the validity of nest building as a measure for compulsive behavior and as a model of OCD in humans. We are treating these mice with acute injections of various drugs such as Fluoxetine and Clomipramine, both effective drug treatments for OCD in humans, as well as Desipramine, an antidepressant which is not prescribed for treating OCD, as a negative control. In addition to helping on these projects. I have also been weaning, clipping tails, and ear tagging mice.

I am majoring in behavioral neuroscience and minoring in Spanish at The Ohio State University (Class of 2016). I am also an Undergraduate Researcher in the Ostrowski Lab at The Ohio State University. I am a member of Alpha Epsilon Delta, the Premed Honor Society at OSU, through which I enjoy volunteering at free clinics. I am also a member of Recipe for Good, an organization at my school that goes to various soup kitchens and food banks throughout Columbus and prepares meals.  Through my previous high school summer internships at the National Institute on Drug Abuse (NIDA), I was first exposed to Neuroscience and research which lead to my interest to medicine.  I am planning on getting an MPH in Epidemiology as well as going to medical school and specializing as a surgeon. The past summer 2014, I spent three weeks shadowing doctors in a hospital in a remote region of Nepal where I observed first-hand the health disparities and lack of access to health care that many Nepalese people face.  Once I have completed my education, I would like to return to Nepal, where I was born, and practice medicine. In the future, I’d also like to participate in Doctors Without Borders. 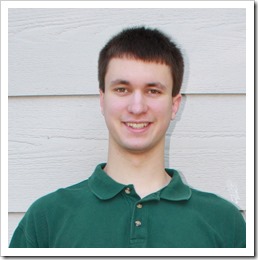 Meyer Lab of Motivation and Addiction, University at Buffalo

I am a rising senior at Ankeny Centennial High School in Iowa. This summer I was fortunate to be selected for the REHU program at the Meyer Lab at the University at Buffalo. In the Meyer Lab, my research focused on using ultrasonic vocalizations as a measure of the acute effects of cocaine. 50 kHz ultrasonic vocalizations are associated with positive, appetitive affective states such as that of intraspecies play or mating. It has been suggested in past studies that animals showing sign tracking in response to food cues emit more 50 kHz ultrasonic vocalizations immediately after receiving a cocaine injection than goal trackers. The tendency to sign track (at least in rats) is a behavioral phenotype thought to correlate to addiction and relapse risk. This coupling of a learned response to food reward cues and an immediate, presumably affect-related response to cocaine has interesting implications to the psychology and neurobiology of motivation and addiction.

In collaboration with the Clark Lab at the University at Buffalo, we attempted to elucidate the neural basis of this coupling in a lesion experiment. The results from this pilot were very exciting, and a follow-up experiment is planned for Fall 2015.

After high school, I plan on pursuing an undergraduate degree in biology and mathematics. I would then like to enter a graduate program and eventually pursue a career in research that betters the human condition. I do not know what specific area this will be in, but the summer NIDA Genes and Addiction REHU has introduced me to neurobiology, the scientific community, and the research process. This experience confirmed that research is absolutely something I want to do in my career. 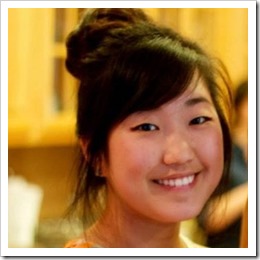 For the NIDA Rat GWAS (P50) project, we are using a Pavlovian conditioning paradigm to assign phenotypes (goal-tracking, sign-tracking, intermediate) to the rats in terms of their addictive behavior to certain cues, which is relevant to drug addiction in humans. The main objective of the project is to investigate possible genetic factors of addiction represented by these phenotypes. The Robinson/Flagel lab is primarily responsible for behavioral testing and phenotyping the individual rats while the genetic analysis will occur several years later with a collaborator site. During my time in the Flagel lab, I have been  familiarizing with the rat brain and its anatomy. I have practiced mounting rat brain slices and I also performed immunohistochemistry to stain specific proteins in the brain.

In the Robinson lab, where I have been spending most of my time, I have been helping out with several preparatory tasks such as taking inventory of tools for euthanasia, preparing specimen for shipping to other collaboration sites, tracking the rats’ weight progression, and preparing saline and cocaine solutions for injection. During the testing weeks, I was involved with handling and placing the rats in the testing boxes and I even got to inject a couple with cocaine!

I am a rising junior at Purdue University and hope to pursue a career in medicine with a research focus on drug development. 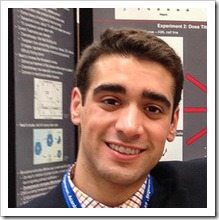 Meyer Lab of Motivation and Addiction, University at Buffalo

I am a rising sophomore majoring in biology at the University of North Carolina – Chapel Hill. I am interested in medicine, but not yet sure of which specific field I would like to focus on. My overall goal is to be involved in translational research, which would allow me to split my time between a traditional lab research setting and a clinical patient base.

This summer I have been working in the Meyer Lab of Motivation and Addiction at the University at Buffalo. Although I have been assisting with multiple experiments that this lab is undertaking, such as self-administration and conditioned context preference, my main interest has been in a study involving optogenetics and Pavlovian conditioned approach. Optogenetics is a combination of optics and genetics that allows us to control well defined events in specific cells of living tissue, by incorporating light-sensitive proteins into neurons via a virus and activating that protein via a laser, leading to neuron firing. This technology allows us to artificially activate the mesolimbic dopamine pathway, which is believed to be targeted by all addictive substances, and assess how this affects rat behavior. Comparing the behavior of rats in which we artificially activate the mesolimbic dopamine pathway and those which we administer drugs will provide valuable insight into what role this specific neurobiological pathway plays in addiction, and improve clinical approaches to treatment of addiction.